We get a rundown of the tour. 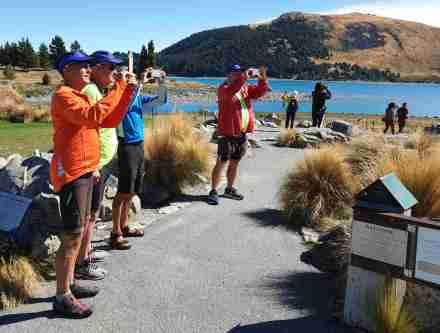 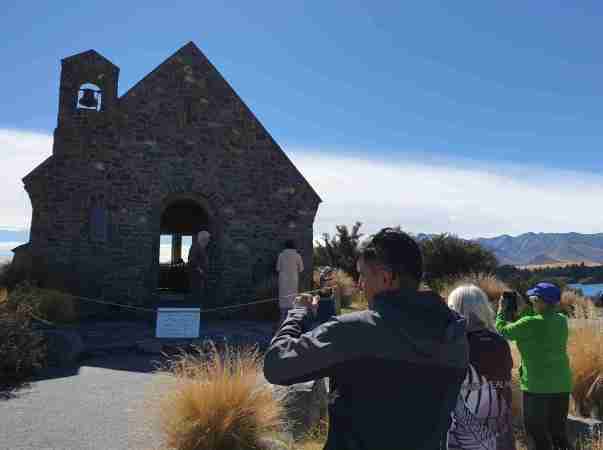 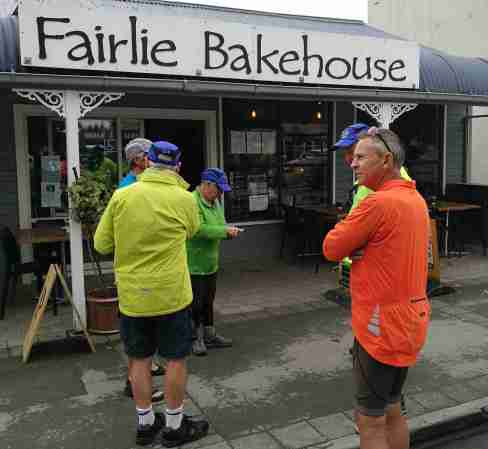 After meeting with the Tuatara Tour people in their office in Christchurch we were transported by Stu our guide to the Tekapo Canal road for an easy ride to the Lake Pukaki Visitor Center. On the way there we stopped for a photo opportunity at the Church of the Good Shepherd and at Fairlie we sampled some of New Zealand’s best pies. From the visitor centre Stu transported us to a very nice motel in Twizel. There were ten people in the group. Six were on ebikes and four were on standard mountain bikes. 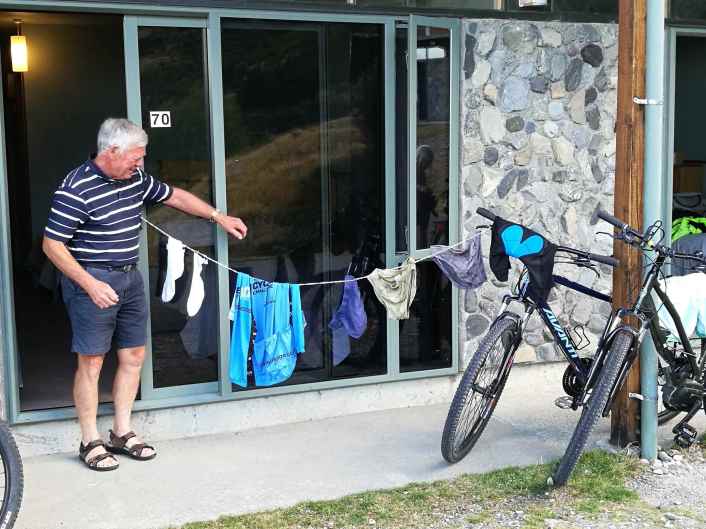 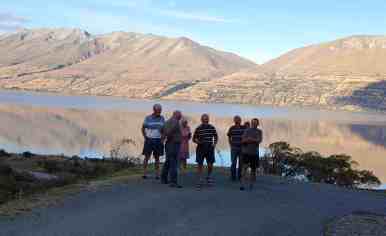 From Twizel we biked to the Ohau Canal over the Ohau Weir and onto Lake Ohau Lodge. Another easy section.

This was probably our toughest day. We left Lake Ohau Lodge and zig zagged our way up the hill behind the lodge and zipped down the other side to the Quailburn Woolshed where Stu was waiting for us with our morning tea. After that we we rode past Omarama into a head wind as we rode over the Otematata Saddle to Otematata. Stu took us back to Twizel for dinner at Poppies as there was no suitable restaurant in Otematata. We went back to Omarama for the night.

In the morning Stu transported us back to Otematata. From there we climbed up to the Benmore Dam where we met the Coffee Guy for morning coffee and then it was a nice flat ride to Kurow where we had lunch under a large picture of Richie McCaw. This was Richie’s hometown. That afternoon we had an easy ride to Duntroon. We spent the night back at Kurow. 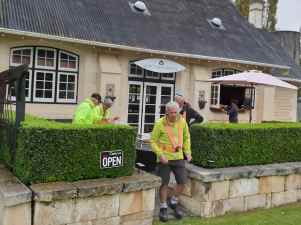 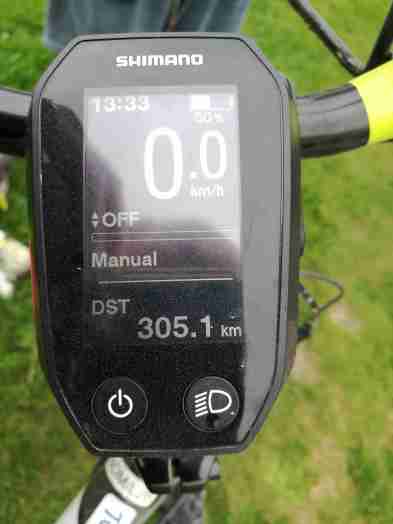 After being transported back to Duntroon we cycled to Elephant Rocks and on through the Rakis Railway Tunnel. From there we travelled along a river path to Oamaru. We met Stu at the harbour and he took us to Christchurch Airport for the flight back to Auckland. 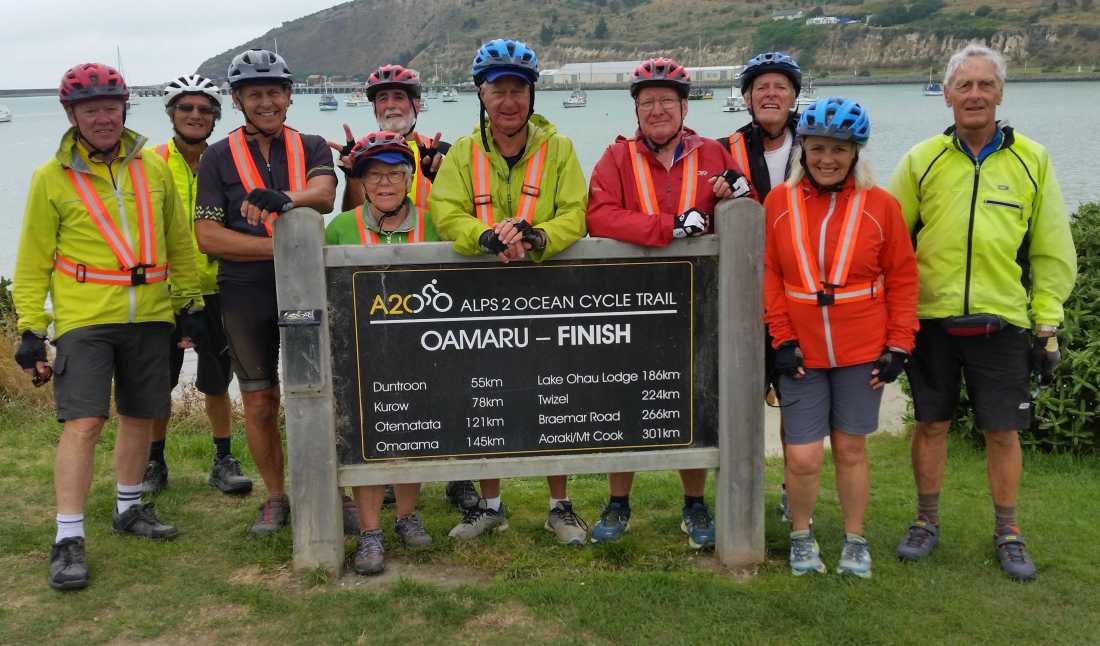 EASCC at Ambury Park. Probably our biggest attendance yet for one of our rides. 32 riders on the ride from Hugo Johnstone Drive to Ambury Park – and beyond. And 15 of those riders rode over to H J Drive from Botany. Thanks Libby for leading (I still don’t know exactly where you took us) and to Geoff for once again taking great care of the Tail End. Text and photos by John McKillop 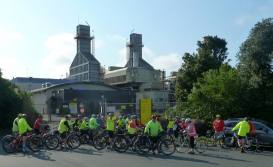 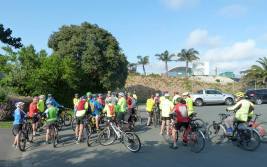 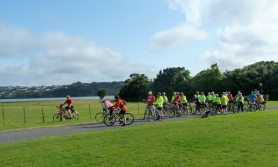 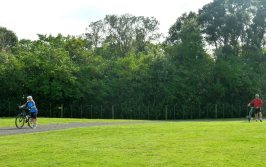 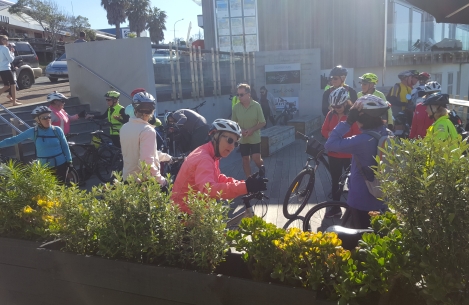 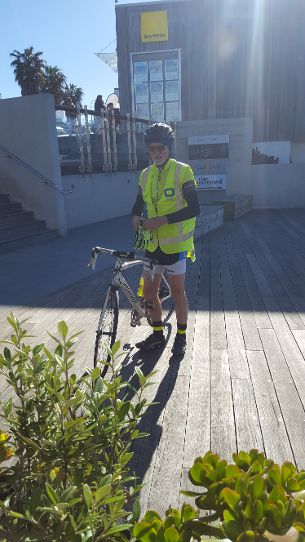 This was a great trip. Slow ferry ride over and a hilly start riding up from Kennedy Point. We had a coffee stop at Onetangi before tackling the steep hill on the way Oneroa. Two of us made it up the hill without walking! Lovely lunch at Oneroa in a restaurant overlooking the beach. A quick ride took us back to Kennedy Point and on a much nicer ferry back to Half Moon Bay. Thank you to Libby for organising the ride. She even prebooked the lunch!

This is a great ride. We took the ferry into town and headed up the Grafton Gully Walkway, on to the North Western Cycleway and at Unitech we moved on to the new cycleway. After that it was a quick trip down the South Western Cycleway to a lovely lunch at Mangere Bridge Village. After that we headed back to Half Moon Bay. It took two and a half hours of cycling. 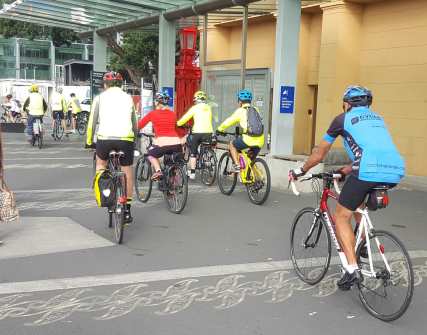 I have never before seen so many cyclists and walkers on the Hauraki Rail Trail. It was chocka. But you will have to take my word for it, as I did not photograph other path users and our group was a fairly small one with only eleven riders today. Actually, I did not photograph much at all. We have done this ride so often most of the scenic shots have already been taken. Thanks to Ray for leading the ride and Ian for tail ending. 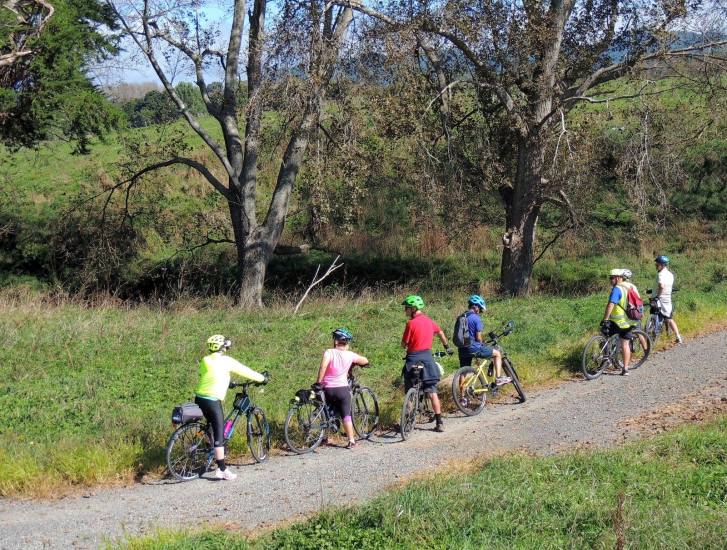 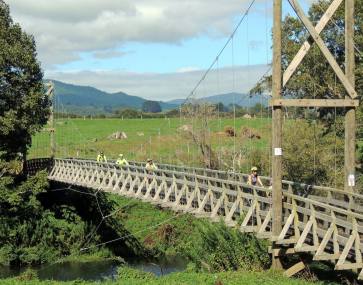 There was clear weather this morning, sweeping away the haze of yesterday. We arrived at the beginning of Te Awa River Ride with ten people. Allan and John lead the ride. The cycle trail is very smooth and an easy ride. The riverside is beautiful. We eventually rode to the Hamilton Gardens where we had lunch. We then returned to the starting point for a total of more than 50 kilometers. Although it finally rained, it was still a lucky day for cycling. 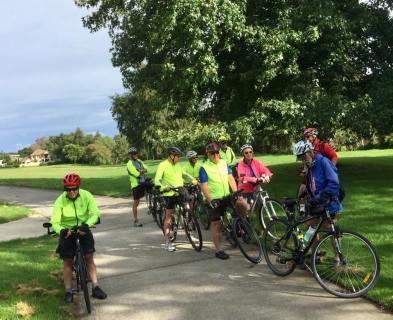 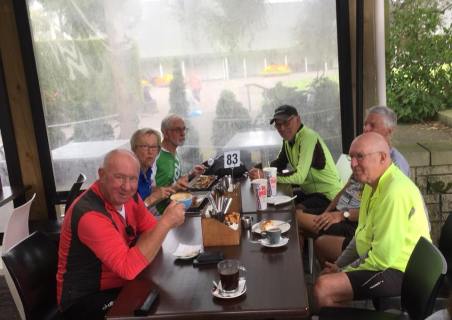 11 riders went on this EASCC two day ride. The group stayed at Kaikohe and rode from Opua back to Kaikoha on the Saturday. These shots are from the second day’s ride from Kaikohe to Horeke and the historic Mangungu Mission House. We rode from Kaikohe and were shuttled back from Horeke. 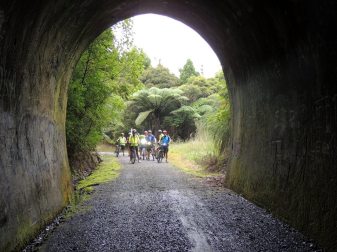 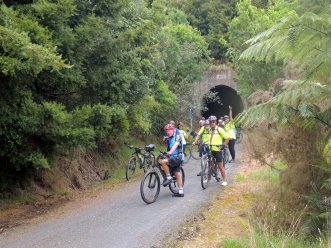 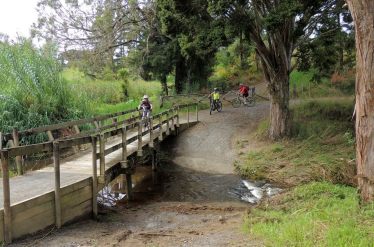 Wednesday 7 February
We were lucky with the ride today. After we had finished it poured with rain. Good leading by Doug and thanks to Sue who was the TEC . She was the only one who noticed Raewyn was missing. We did find her!

22 riders today with Trevor leading and E John looking after the Tail End.

Thanks to Angela for the photos.

Time for a head-count (and photos) on the Rotary Path.

Waiting for everyone else to turn up before going round Panmure Basin.

E John checking to make sure everyone has got across the Panmure Bridge OK.

And a couple of late starters from Doug.

They can smell the coffee.

Angela reckoned it was a lovely time for 19 Buddies from city ferry to Lincoln road round trip via North Western . Thank you to Ian and Russell.

I’d have to agree with her.

Most of today’s riders travelled in to town on the Half Moon Bay Ferry.  But a couple rode in – let’s face it, they have bikes;  one arrived by train;  and 4 joined the ride at the top of Grafton Gully.  They reckoned it was easier to ride there from Howick rather than ride up the Gully.

Here are some of Angela’s and John’s photos.

Getting organised at the Ferry Terminal.

Ready to ride up Grafton Gully.

On the way home after our Hollywood coffee.   Rapidly approaching alongside the NorthWestern Motorway. 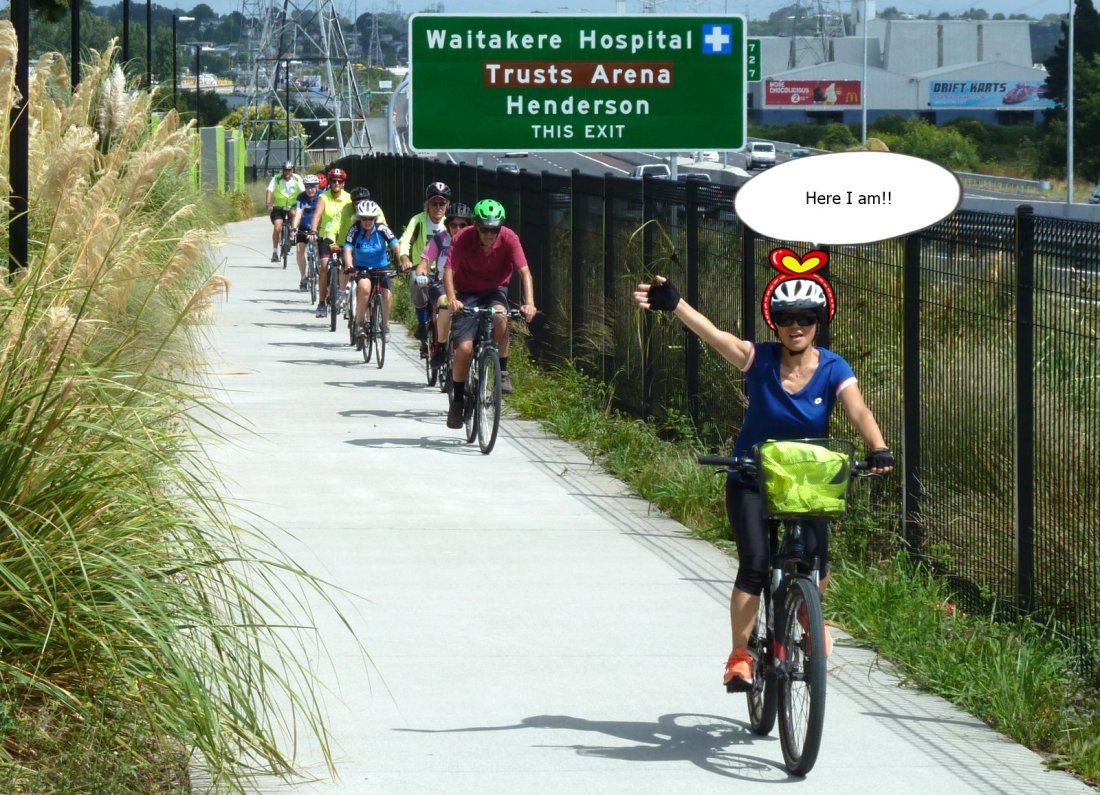 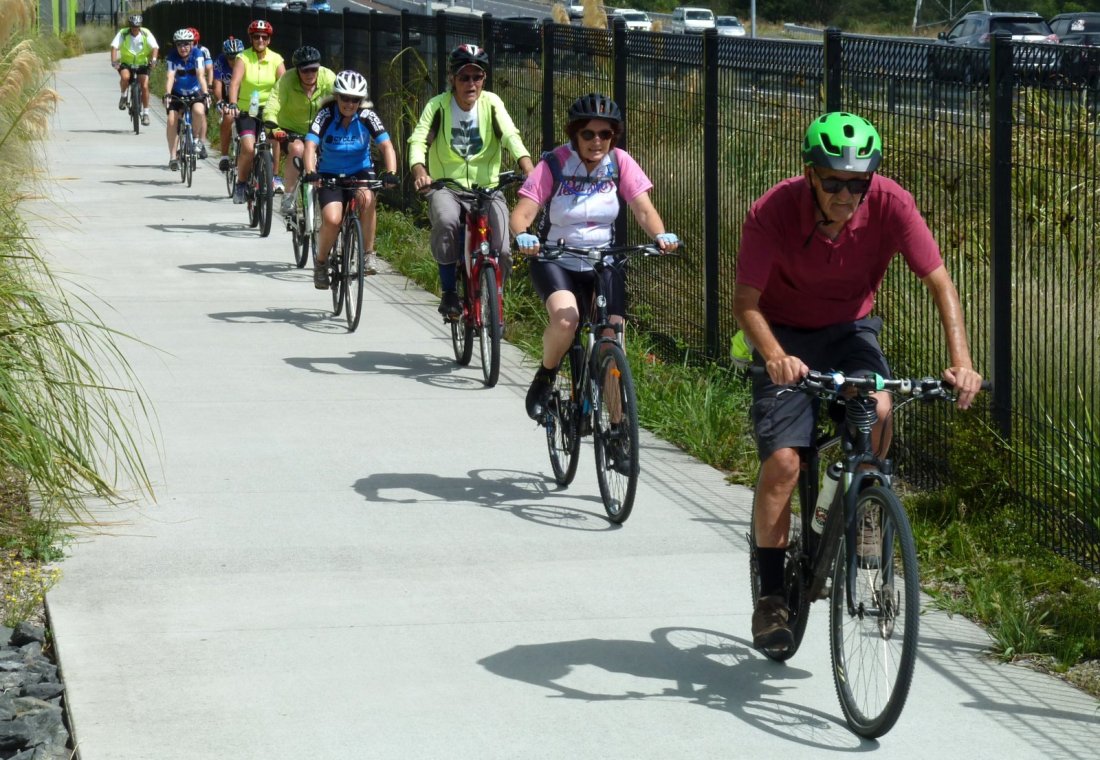 And there they go – with a wave from a friendly pedestrian.

David stopped to fix a puncture.  But, on inspecting his tyre, he found that there was nothing wrong with it.  Apart from the fact that it was flat.  He pumped it up and carried on.  One of today’s great cycling mysteries.

This quartet look very happy to be on the ferry on the way back to Half Moon Bay.

Doug sent these pics in and had this to say:-

Well, it was a blustery kind of day when 15 keen riders turned up for the Cascades Derby today. Spinnakers up going out but all sails trimmed for the home run against a stiff but intermittent wind. Consequently all coffees and hot chocolates were well earned for riders, TEC Val and Geoff the assistant TEC. As always TEC support is always appreciated. As for the leader it was the occasional one hand on a wobbly bar with wobbly photos as a result! Somehow managed plenty of my front wheel though!

😎 We missed you today Angela!

Yep, sure was blustery today. 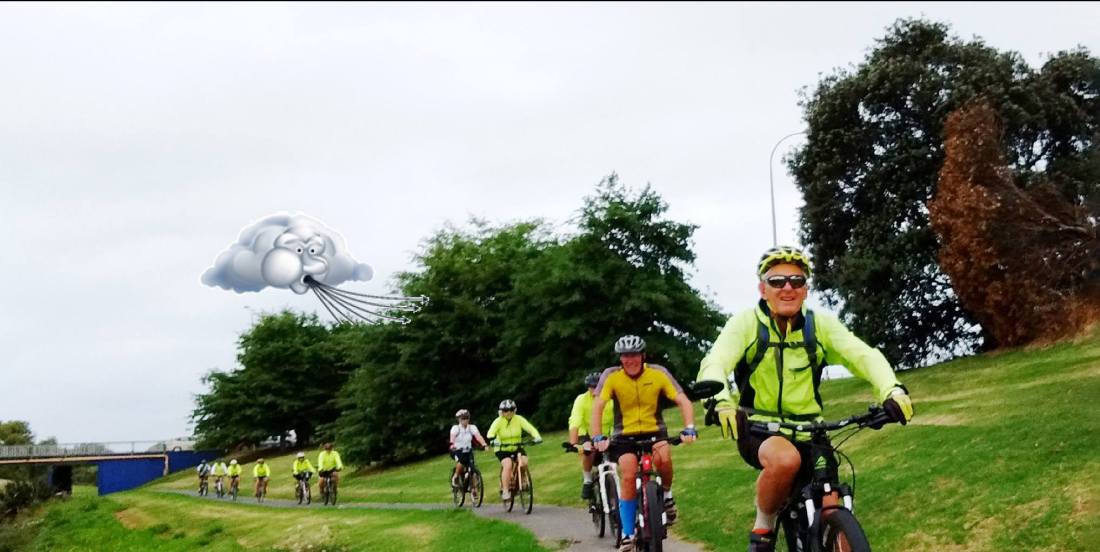 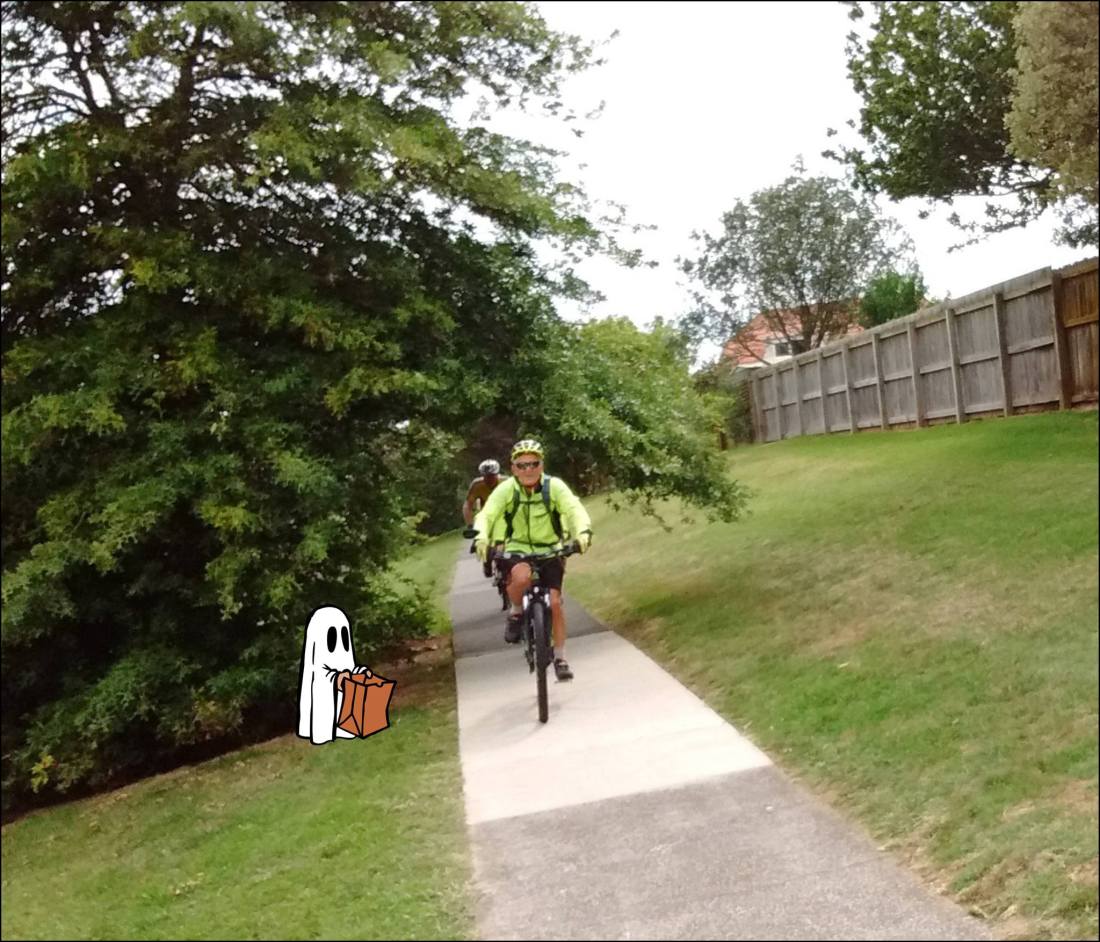 Angela sent these pics in.

If you look carefully over to the mudflats, you will see many birds in the departure lounge awaiting their flight to the Northern Hemisphere.

Heading back – coffee’s not far away.

That’s what friends are for.